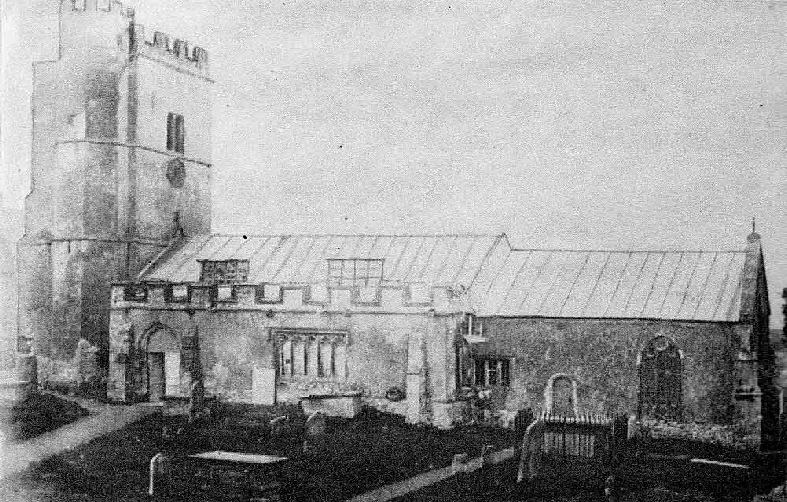 Surviving records of the English Civil War, Commonwealth and Protectorate (1638-1660) or the ‘Commonwealth Gap’ as the period is known among local and family historians, are notoriously hard to make sense of due to their fragmentation.  Understandably, accounts of this chaotic era spanning the last 400 years, sometimes include inaccuracies. An undated list of parish priests displayed  in the parish church of  St Mary the Virgin, Thorncombe reads, ‘No vicar - 1647-1662 Commonwealth under Cromwell; 1662-1680 William Bragge, MA’. It omits to mention that while William Bragge did not become Thorncombe’s vicar until 1662 , he was the incumbent from 1647. (Who was William Bragge?) His two predecessors, Thorncombe’s Anglican vicars during the Commonwealth, Robert Gomersall and John Bragg, as well as falling foul of the parliamentary authorities for their royalist sympathies are also victims of self perpetuating inaccuracies.

The Victorian photo above shows the old church, which would have been familiar to  Thorncombe’s 17th century priests and parishioners.

The 1643 Ordnance Against Superstitious Innovations required the demolition of altars and altar rails and that a table be placed in the body of the church. That table survives in the Lady Chapel in the 19th century church along with the pulpit from which each of Thorncombe’s commonwealth incumbents, Robert Gomersall, John Bragge and Richard Bragge must have preached.

Royalist poet, dramatist and sermoniser, Robert Gomersall was Thorncombe’s parish priest from 1628 to 1644.  No accurate record of his demise or its circumstances has ever been traced.  Gomersall’s estimated date of death varies depending on which of various references to his life spanning four centuries you look at. In his will dated 22 March 1643, he names his wife Helen as his executor and leaves legacies to his children Robert, Christian and Helen.  Probate was not granted until 1646.  But it took five more years to settle his estate because just before he died Gomersall had been found guilty of ‘delinquency’ by the puritan Sequestration Committee for  ‘adhering to ayding & assisting the Enemy agt. the Parliamt’. Robert Gomersall was a close friend of fellow poet and staunch royalist Thomas Fuller, Rector at nearby Broadwindsor. Fuller preached to Charles I by special request when the court was in Oxford. He was chaplain to the regiment of Sir Ralph Hopton, the commander of the royalist forces in the south-west. Gomersall’s brother-in-law, Thorncombe cavalier Richard Bragge  of Sadborow, fought under Hopton and was also sequestrated for delinquency. Given his propensity for preaching florid pro-royalist sermons from Thorncombe’s pulpit, it is hardly surprising therefore, that Gomersall came to the attention of the parliamentarian authorities.

In 1649  bounty hunters reported Gomersall’s death to the Committee for Advance Money and drew its attention to undeclared debts against his estate worth 1700l,  the interest from which generated an income for Gomersall’s widow Helen under the terms of her late husband’s will. During the Commonwealth a network of bounty hunters and spies earned their livings fingering those with royalist sympathies and means to the authorities.  Helen put up a spirited fight to save her inheritance on the grounds that she had not committed any crime against the state herself. But on 1 October 1651 she was imprisoned for refusing to pay her husband’s fine. For nearly three months she continued to argue from her prison cell, complaining in her petitions that she was ‘sick and weak’, being kept under ‘lamentable restraint’, was isolated and unable to talk to her legal adviser. The authorities refused to listen to her pleas. So Helen eventually paid up and was released after nearly 12 weeks confinement on 19 December.

A burial record in Thorncombe’s parish register for a Robert Gomersall dated 24 August 1652 has resulted in the romantic notion that perhaps our man did a Reginald Perrin and faked his own death in order to escape the roundheads? However this idea doesn’t stack up as there is an entry in the Bishop of Exeter’s register dated 24 June 1644 recording the appointment of John Bragge as his successor, per mortem, i.e through death. The Robert Gomersall who died in 1652 and was buried in Thorncombe’s churchyard is more likely his son. If he died around May 1644 perhaps his father Thorncombe parish priest Robert Gomersall was killed at the Siege of Lyme and his body was never recovered?

Gomersall’s successor, John Bragge (1615-1647), son of Richard Bragge senior of Sadborow is incorrectly described in Thorncombe’s parish church guide and on various websites as having been transported to Barbados as the result of his involvement in a royalist plot. John Bragge was in fact parish priest of Thorncombe until his death.  The parish register records his burial in the churchyard on 5 April 1647.  He may not have been a plotter, but a royalist priest called Bragge was captured by the roundheads. On 23 July 1645, following the Siege of Bridgewater, a ‘Brag’ was listed as one of several ‘priests’ taken prisoner. ‘Richard Brag’, probably his brother,  is also included in this list. Forensic analysis of the evidence suggests that the priest named ‘Brag’ taken prisoner at Bridgewater is highly likely to be the Thorncombe incumbent. Details of John Bragge’s sequestration and his date of  death are found in a ‘Petition of the Inhabitants of Thornecombe … desiring Mr Bragg may be their Minister’, presented to  the House of Lords on 3 November 1647. The first signatory was Sir Henry Rosewell of Forde Abbey, a Presbyterian, noted in puritan circles for his ‘true love of religion’. The petitioners request the appointment of  William Bragge as their minister to replace John Bragge. Signed by 62 parishioners, it states that  the signatories, ‘besides the grievances of many robberyes imprisonments and wasting of their Parish for their fidelity to the Parliant have also suffered above these twelve months last past their want of a preaching minister of the Gospel, by reason that John Bragge the last Incumbent by his delinquency agt  State was sequestrated unto the time of his death which happened about half a year since’.