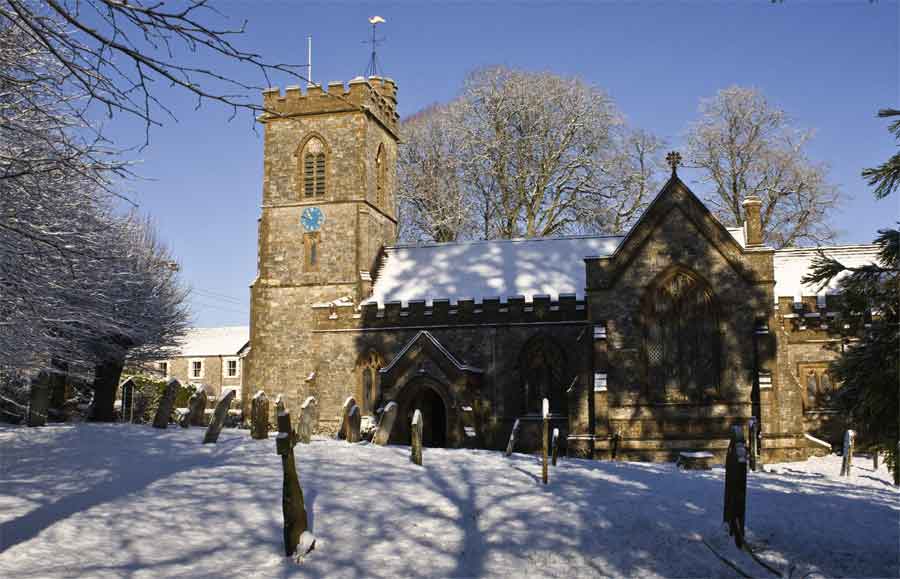 The building of the Church of the Blessed Virgin St Mary, Thorncombe and Forde Abbey, supervised by the Cistercian monks order which came from Waverley in Devon and settled on the banks of the River Axe, took almost a century. The church and Abbey were dedicated in 1239 by Bishop Brewer of Exeter.  The last Abbot, Chard (or Tyblis) was Suffragen Bishop to the Bishop of Exeter from 1508. He was appointed Vicar of Thorncombe in 1529, ten years before the dissolution of Forde Abbey by Henry VIII.

The church stood nearly 50 yards to the south of the present building. A handsome Wellingtonia was planted on the site of the old church over 100 years ago shortly after it was pulled down to make way for the new church. The old church was one of the most ancient in the country and full of interest to ecclesiastical scholars. Its removal has been described as an act of historical vandalism.  The site of the old building with a plan of the proposed new church can be seen on part of an agreement between the builder Maurice Davies and the Reverend J Bragge, the churchwardens and Jane Evans who contracted to pay a sum of £490 for the Forde Abbey aisle. Costing around £4,000 the present church is said to be the last designed by the architect Mountford Allen. His fee was £250. The Building Fund Account lists the many subscribers to the cost of the church; several of the names are still well known to us in Thorncombe today. 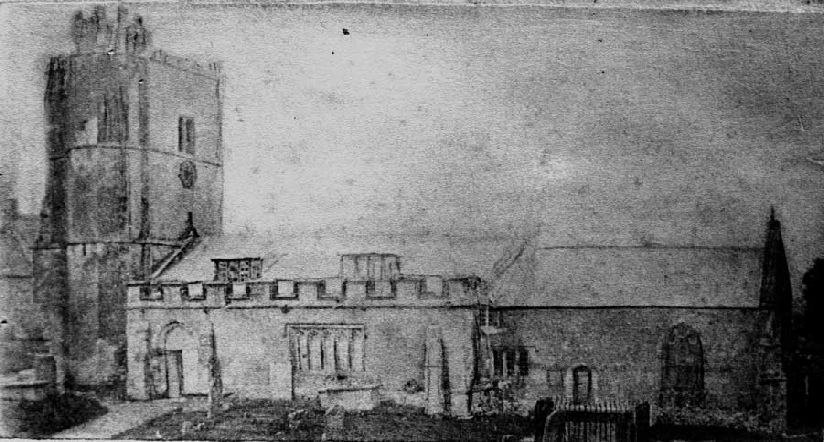 The old medieval church  which was pulled down in 1865 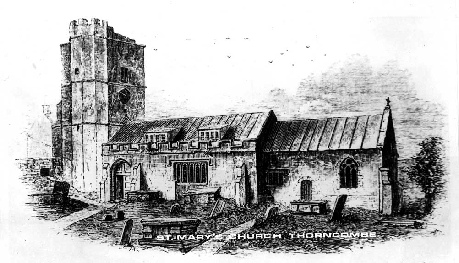 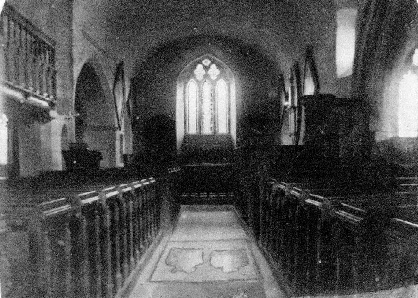 The first vicar of the church before 1239 was Philip. He was succeeded by John de Thorncombe in 1260. Among the company of clergy who served God in this church were several members of the Bragge family. Their name is found on the church windows, walls and on the monuments and church furnishings. The painted panels behind the altar were painted by a sister-in-law of Charles Bragge. Their estates and involvement in the village have been extensive since an ancestor bought the Manor of Thorncombe which included the patronage of the church, during the reign of Elizabeth I. On old records and documents the Bragge name is found again and again up to the Great War when Captain Bragge served his country. In 1643 Vicar John Bragge was taken prisoner and fined for fighting on the royalist side at the Siege of Bridgwater. He died the following year and is buried in the churchyard. Matthew Bragge from Chaffeigh was executed in 1685, accused of taking part in the Monmouth Rebellion.

The foundation stone for the new church was laid in 1866 by Margaret Bragge, widow of Colonel Bragge of Sadborow and dedicated by the Bishop of Salisbury on 15 October 1867. In was built in imitation of the Perpendicular style, the windows being modelled on those in the cloisters of Forde Abbey. Relics from the former church include the arch under the tower, the font, refixed upon a ham stone pedestal, a portion of the pulpit, reading desk and several pew ends carved in linen-fold. The tower is surmounted by the weathercock and cross from the old building.  Several monuments from the old building were also removed into the present church, the most interesting and valuable being the wonderful medieval brasses depicting Lord and Lady Brooke of Holditch Court. Only one other brass memorial in Sussex is said to be as fine.

The five bells from the old church were later re-hung, and it was said that the bells were buried in the churchyard for a time while the tower was being rebuilt. They were the heaviest ring of five bells in the Diocese of Salisbury, the second heaviest in England and the fourth heaviest in the world. Their total weight is just under three tons. Engraved ‘Thomas Bilbie Fecit 1772’, the tenor bell was recast in 1936. It also bears the inscription ‘I to church the living call and to the grave summon all’. The names  ‘Elias Forsey and George Trenchard, Churchwardens’ are also inscribed.

In 1962, helped by the Baron Trust, the bells were increased to eight and a new frame fitted. A new ringing platform was built in the bell tower. The new treble bell bears the name of Christopher Bonfield whose family subscribed very generously its cost. His son Howard is the leader of the bell ringers today, ringing each Sunday and at Monday practice, as well as on Holy Days. During the summer visiting bell-ringers made a loud and joyful noise (though not always to the joy of those living nearby!)

The church clock, built and installed by John Smith and Son in 1889 cost ‘complete with ding dong chimes, two dials and striking hours’, £116. Farmer Hellyer of Thorncombe Farm later paid £25 to have the clock face painted blue and gold, but this no longer shows. Over the years other improvements have been carried out to the church building. In 1967 to mark the church’s centenary, a new organ was installed, costing £3,300. This was not without a certain amount of criticism from some of the congregation. Fund raising was slow although an auction was organised, mostly by the farming community. Donations included calves, piglets, rabbits and an ancient churn.

When the parish was transferred in 1844 from Devon to Dorset, it was also transferred ecclesiastically from the Diocese of Exeter to the Diocese of Salisbury. In 1981 the religious life of the parishioners was widened by fellowship with Winsham and Cricket St Thomas, when Thorncombe became part of the Diocese of Bath and Wells, with its present vicar serving all three parishes. Links with Forde Abbey chapel too have been maintained with services held there regularly. The move was not accomplished without opposition and much argument, the older members of all the parishes being much opposed to change. Winsham lost a very loved Vicar, while Thorncombe, enjoying its Dorset associations, feared the transfer would lead the way to the parish being swallowed up by Somerset.

The people of the village seem always to have had a close involvement with their church. Various organisations such as the Mothers’ Union have continued since its inception to the present day. In 1965 a robed choir was reconstituted, 22 members singing at Matins only. In more recent times the membership has fluctuated but the musical tradition took a new turn when a guitar group was formed under the leadership of Marina Atyeo in 1976. Thus another member of the Bonfield family added another weave in the tapestry of church life. The guitar group has made two records which can be found in homes near and far including Australia and America.

Taken from the late June Ede’s unpublished manuscript, ‘Thorncombe, A Village History’. June lived in Thorncombe village from 1968 until shortly before her death in 2009. Written in 1982 in response to a national Women’s Institute initiative, it was donated by Mrs Ede, to the TVT history box in 2008. Reproduced here by kind permission of June’s daughter, Penny Kennedy. The photographs of the bell ringers are from Wilfred Potter’s archives and  reproduced here courtesy of Marina Atyeo. St Mary’s Churchwarden, Mrs Pat Barnes kindly gave us access to the photos of the old church, as did Ron Frampton.