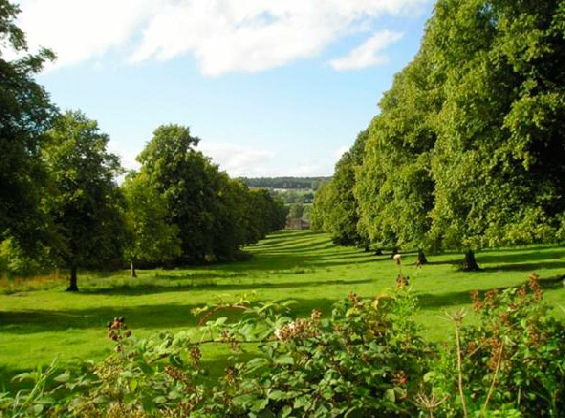 The main approach to Forde Abbey in the 18th century

On  Guy Fawkes Night in Axminster  in 1714 “a Jacobite High Church rabble from … Thorncombe rescued effigies of the Pope and Pretender from a bonfire, proclaiming the latter King of England ” . Jacobites were loyal to the memory of Charles I and held that the Roman Catholic House of Stuart, were the rightful heirs to the English throne not the Hanoverians.  The story behind  the Devon Oath Rolls suggests  that Thorncombe’s  gentry if not actively part of the Axminster rabble had leanings in that direction but swam with the tide when required .

Francis Gwyn Esq  was  married  to Edmund  Prideaux’s  daughter, Margaret who inherited  Forde Abbey in 1702.   Gwynn was  born the year before Charles I’s execution and was a member of the Welsh gentry.  An  MP from 1673, he cut his political teeth in the Court of James II, father of the Old Pretender. In his capacity as Clerk in Council,  Gwyn attended James II in his Salisbury chambers while the King waited in vain for military reinforcements to oppose William of Orange’s triumphant progress from Brixham to London  in  the ‘Bloodless Revolution’ of 1689. A  surviving fragment of Gwyn’s diary describes James’  agonising last days as King,  including  the succession of visitors with news of defections, the king’s nose bleeds and the royal party’s frequent attendances at chapel .

Gwyn’s impressive social and political connections and his diplomatic skills ensured his political and personal survival during the unstable period following William III ’s seizure of  the throne and his sister Anne’s subsequent succession. As well as being rich with estates and properties in Somerset, Dorset,  Devon and Wales, Gwyn was related to Queen Anne’s prime minister Robert Harley by marriage. Nailing his flag firmly to the Tory mast, he became Queen Anne’s  Minister for War, also enjoying a cordial relationship with the monarch. The Queen died shortly before she was scheduled to make a private visit to Forde Abbey . A four poster bed made specially for her visit survives. Mortlake tapestries,  now lining the walls of the saloon were  confiscated from Edmund Prideaux  following accusations of high treason during the Monmouth Rebellion, were presented to Gwyn by Queen Anne as a sign of his trustworthiness.

Forde Abbey as Francis Gwyn may have known  it.

Taken from A description of England and Wales containing a particular Account of each County,  Vol. III published in 1769,

The majority of  country Tories of whom Gwyn was one, were still covertly for the restoration of  the Old Pretender. But support  “rarely amounted to more than drinking toast to ‘the king across the water’ ”,  which perhaps accounts for  why Gwyn signed each of the 1715 and 1719  Oath rolls. Discretion being the better part of valour, suffice to say  Francis Gwyn Esq was appointed Father of the House of Commons at the end of George I’s reign.

There is strong  evidence to suggest that Thorncombe parish priest Thomas Cook was also a Jacobite.  He appears to have wrestled with his conscience before taking the 1723  loyalty oath. As magistrates Francis Gwyn and William Bragge of Sadborow  were legally obliged  to sign the rolls for the earlier 1719 Oath or face accusations of being papists. The oath  included a declaration against transubstantiation but significantly Cooke who was also legally required to take the oath, as a parish priest, did not, although he eventually signed the 1723 Oath. Married to the daughter of a cleric from Wells, he was a  “non juror”, one of  400  priests and bishops which included Bishop Ken of Wells, who refused to take  the 1689 Association Oath on the grounds that William III’s succession was not validated by divine right. This led to a schism in the Church of England, loss of livings and persecution. Gwyn was MP for Wells so may have been instrumental in Cooke’s appointment which signifies his Jacobite sympathies. Given Thorncombe’s incumbency was in the gift of Sadborow, this also implicates William Bragge Esq as a supporter of  the Jacobite cause as  he granted Thomas  Cooke the living at Thorncombe  in 1702.

For a more detailed account, references and a bibliography go to: