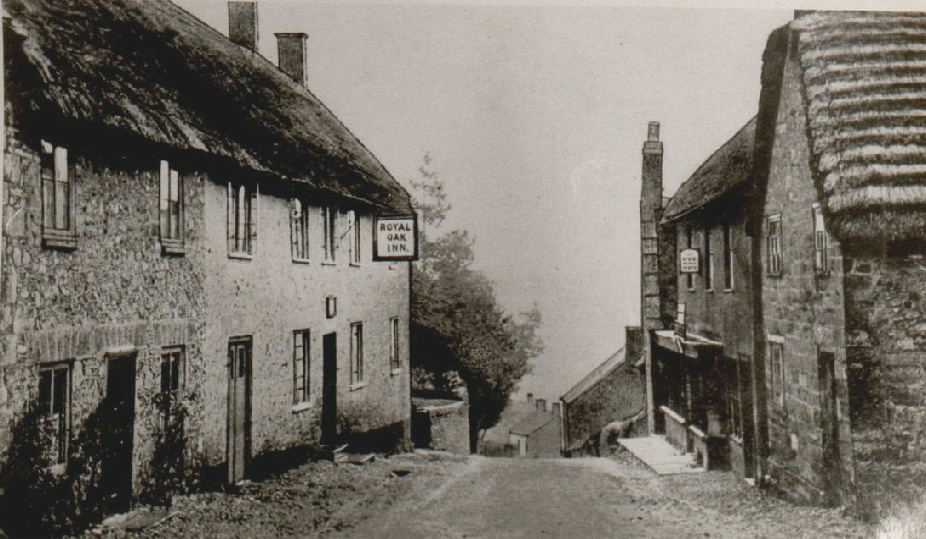 The first thing that struck us about The Royal Oak, when we moved here in 1987, was the welcoming atmosphere, which we soon learned extended through the whole village. Perhaps old hospitality echoes on. We are certainly grateful to our neighbours for their information gladly given, especially Mrs Farley senior, Mr Farley, Mr Down and Mr Masters. The earliest reference we have found to the Royal Oak Inn is a deed of 1794, but its walls are older. The end wall by the War Memorial, to the top of the windows is from about 1600, according to the Royal Commission for Historical Monuments. Lovers carved hearts and initials on the wall long ago. (Broomstick Weddings) Inside the house, the hamstone work above the windows is reddened, so there was probably fire and collapse. The other walls are from later in the 17th century. There is little original work inside, although in the 18th century somebody cut an arch into the front of a Tudor fireplace, perhaps to warm himself above the knees. At some time before 1790 the Inn consisted of two properties. This may explain why a branch of the village sewer runs under the cross-passage.

We cannot be sure if owners mentioned in earlier deeds were also the Inn landlords. Fowler, Bagg and Judge all signed a complex deal including both the Inn and some land and cottages at Hewood. Three wives also signed, and had to appear under a recent Act before perpetual Commissioners for Somerset, who certified that Mesdammes Berry, Phillips and Fowlers were ‘of full age and competent understanding, and that they were each of them freely and voluntarily consented of the same’. Incidentally, Hewood appears then and in 1772 as Heywood, in 1603 as Hewerwood and in 1658 as Hewood. In 1794 when George Berry sold the Inn to Joseph Shepherd, Berry had made part of his living as a fuller. He would have cleansed and thickened cloth by beating and washing, using fuller’s earth – a silicate of aluminium, now used for cat litter. By 1829, a George Berry (maybe the one from 1794 or his son) was a clothier, making or selling woollen cloth, and owning the property. He then sold to William Bagg, a carpenter. Maybe inn keepers often had a second jobs even in Thorncombe during the 18th and 19th centuries when the population exceeded 1,000. Mrs Farley senior’s father, Frederick Jeffery, was also a carpenter. He made water wheels for West Forde Mill. Arthur Paull broke stones for highways.

Looking down  Fore Street,  circa 1910, Royal Oak pictured on left 1

Those named in deeds  for the Royal Oak dating back to the 17th century were not necessarily inn keepers. So the buildings and their uses may have changed. There were the Pinsons: William, 1603; George 1653 and Elizabeth 1658; Bernard Pinney and Edward Bragge, 1623;John Ganden and Richard Loveridge, 1649, when Sir Henry Rosewell was at Forde; Joseph Follet in 1769 and John Jeffery in 1772. We would be glad to learn that William Wordsworth called in for a drink on his walks from Racedown in the mid 1790's, but so far we have not found a poem to pay for ale.  The 1861 census shows Ann Clark, a gardener and Thomas Ousley parish clerk and letter carrier, as heads of separate households living in the Royal Oak Yard. Did they live in part of the hay loft in the barn or the stables? Or were there small cottages in the yard?

Many people living in Thorncombe remember the Royal Oak as a pub. The Golden Lion was often called the 'Top Pub', the Royal Oak 'Middle Way' (to perdition? or just half way house?) and the Crown 'Bottom Pub'. From the war memorial end in the early 1920's under Mr Jeffery, the rooms were, a private sitting room, kitchen, cross-passage, bar and cellar at ground level, with another door to Fore Street for the barrels from local brewers. Mr Down recalls two bars, one each side of the cross-passage, both from the earlier time of Walter Paul and from times after Mr Jeffery's. Behind the inn was a skittle alley where the brewhouse had been. Footballers changed there too. When landlords did  their own butchery, carcases would hang in the alley doorway for a while. Hot takeaway food was sold from the inn in living memory: tripe and onions on some days, faggots on some others. The extension now  behind the house is half of what at one time was the Ladies' Snug.

The churchyard wall still carries the brackets which once held a rope to help patrons uphill and homewards. A merry customer drove an Austin 7 down the  path to the back door. But he couldn't back it up again when less merry. Neighbours tell of flood from surface water coming down the back path. We trust the new village drain now laid under it, but keep the phone number of the flood team. The inn and later the house was thatched until at least 1965. We do not know if it escaped all the Thorncombe thatch fires.

We have dug up a George III farthing - good for a half pint - most of a cider quart, bearing a tree pattern which we are assured was made using spittle; and a clutch of clay pipes. The inn was still selling clay pipes in the 1920's. Tradition offers more riches: it says that monks working in the flax fields were called for their meals from the windows which now look on the war memorial. It is also said that monks lived on the site during the last Abbot's rebuilding at Forde Abbey. That was in the 1530's, so if the RCHM date of 1600 is right for the north-east windows, the monks would have been in earlier buildings. But it would make sense to house  them by the church.

After Mr Jarvis's landlordship, the house was run as a boys' home by two ladies. Mrs Farley senior recalls some of them at the top of the church tower at night, hammering away. From 1965 Mr and Mrs Humfrees had a pottery with two kilns in the house and barn. Some of their pieces are around the village. In 1970 Mr and Mrs Strouts came to live; they kept a dog cart in the barn. A  happy moment from 1945; it is said that on VE night, a village resident, still happily with us, danced on the pub's piano. Looking at the height of the ceilings, and the height of people, we think it must have been the piano which was legless.