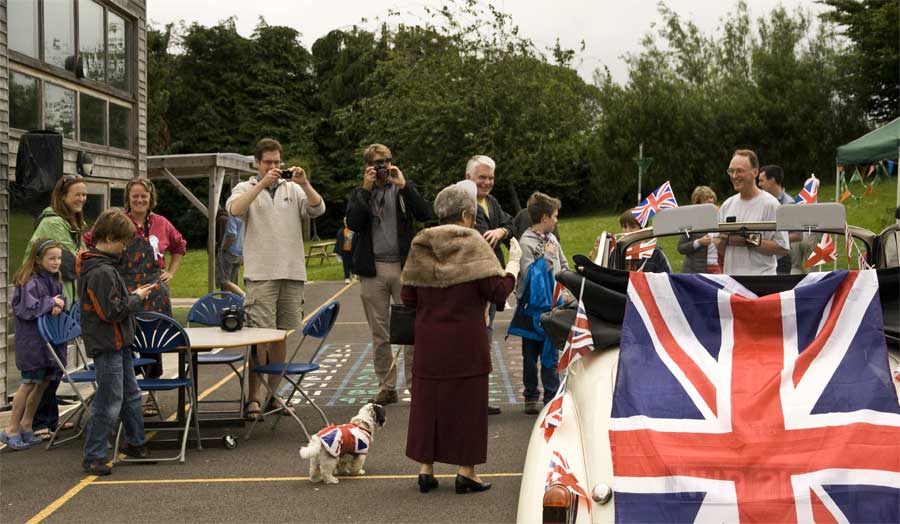 ‘3rd January 1876, Opening of Thorncombe New School. Service in church; and Feast followed by Magic Lantern.’ This is the first entry in the School’s Log Books. Since that date 1,923 children have entered its door. Ebdon, Oliver, F.A. born 27 March 1884 has the distinction of being the first pupil on the Admission Registers. Earlier admissions are not recorded. Speed, Nicola A born 2 February 1969 has the distinction of being the last pupil to be admitted through the old school door, for on 5 February 1974, the Log entry reads, ‘Outbreak of fire in main school roof, building totally destroyed.’

‘It is indeed sad that 98 years of history should have ended so abruptly in but a few hours of devastating fire. No doubt countless reminiscences welled into the minds of former pupils when they first heard that the old school had gone. Yet, by the grace of God, the traditions and spirit engendered by colleagues and children throughout those 98 years will be preserved. Joyfully news has been received that a new school will be built by the Local Education Authority on land adjacent to the Village Hall. Although some of us will feel that part of our personalities has been lost in the old buildings let us look forward with hope, and trust that the new school will rise like a phoenix and being rejuvenated will continue and strengthen all that is good in St Mary’s School,’ wrote A.E.O Jordan. This brief message to the village by the headmaster of our local school, must have been written with very mixed feelings. Sadness for the loss of the old school with its associations and optimism for the future school life of the village, after fears that it might lose its school altogether.

The old modernised building, of 19th century Gothic design with adjacent headmaster’s house was quite a feature of the village centre, facing across the village street to the Church with which it was closely linked. It taught children from all over the parish, from its Winsham and Blackdown boundaries to its western borders at Holditch. 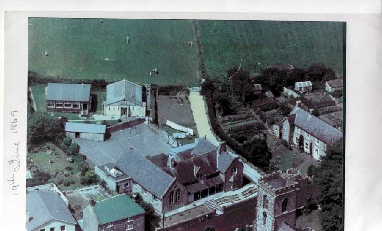 Realising the school could not be saved, fireman concentrated on saving the headmaster’s house, while the villagers who rushed to the school on hearing the exploding slates and the fire engines, joined in a dramatic effort to save his furniture and possessions.

Fortunately the fire broke out at lunch time and most of the children were enjoying their lunch break in the school yard. A couple of girls playing with their Sindy dolls and a little girl in the lavatory were quickly pulled to safety. A small boy who had been scolded for not eating his rice pudding was told firmly to stay and finish it before playing, and had to be persuaded to disobey the dinner lady.

For some time the ruined school stood sadly while plans were being made for a new school and meanwhile the children were taught, played and lunched at the Village Hall. Soon the phoenix rose, and today this compact modern school with its well equipped hall for games and assemblies and the kitchens at the end of the building is a real asset to the village. It is surrounded by spacious lawns, games pitch and playing field. The trees planted on its border will one day add graciousness to the grounds.

Recollections of schooldays are legion among our senior citizens. I would think everyone has a memory of some teacher who made an impression upon them. One lady whose character out of school was Christian, loving and golden, evidently has her name engraved in terror on the hearts of her pupils. Stories are told of being made to stand in a corner with a bucket over the head, and being too frightened to ask for the lavatory. Mouths were washed out with carbolic soap if a pupil was foolhardy enough to let slip a bad word. (I wonder how high the school’s soap budget would be in this more permissive age?) One lady recalled three young boys being so afraid of punishment they jumped out of a window with the teacher in hot pursuit. 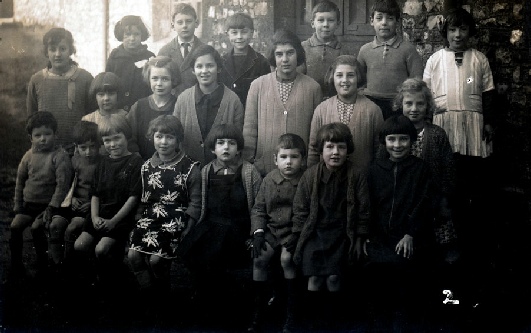 Thorncombe schooldays, circa 1930. Wilfred Potter is pictured back row fourth from left.

Empire Day, however, brought happier memories of lining up outside the school and saluting the flag while ‘Land of Hope and Glory’ was sung. The verger of the Church opposite would join these celebrations stiff to attention before the union jack and occasionally wiping away a patriotic tear. Miss Birbeck would then dismiss the children with a gift of dolly mixtures – perhaps making up for some of the previous terrors.

Wartime reminiscences recall the trench dug behind the little cemetery into which the children were required to leap if the occasion demanded. There are tales of evacuees whose inexperience of country ways gave the locals some amusement. Alfie and Albert, brothers of one of our W.I ladies came into the village from London. They were fascinated to watch Mr Randall, one of the teachers, planting potatoes in his Dig for Victory Plot just along the road from the School, asking ‘Oi mister, you ‘iding them from the Jerries?’ Neither would they drink the milk ‘from them dirty ole cows’. No, they required the nice clean bottled kind. (Memories of a Thorncombe Evacuee)

Here and there in the parish are homes that once were used as schoolrooms. The Dame School was no doubt quite common before the National Schools came along. The house I live in which used to face the old church and is logically called Church View Cottage was once part of a single building. Its deeds are said to record the existence of a parish room downstairs and a schoolroom upstairs. 50 years ago a good number of children attended the school at Holditch. Opposite where an unusually modern house now stands was Bird’s House, named for the owner and said also to have been a small school. In these Holditch schools, small shells were used as counters and from time to time these come to light in someone’s button or treasure box – smooth with much handling. School House is a small group of houses with a large farm, lying between Thorncombe and Hewood. The farm was once the site of a village school. I wonder if it was the ‘great house’ which was the gift of one of the vicars of Thorncombe in 1734? Reverend Thomas Cooke is described as being well known for his amiable disposition and charity He gave the parish a ‘great house with a great hall, butteries garden and orchard for a schoolteacher and six children.’

In 1867 the Blackdown Trust came into being, the children of Thorncombe parish benefiting together with children from other parishes around. This trust is still in force today and is concerned mostly with helping those seeking further education.

Taken from the late June Ede’s unpublished manuscript, ‘Thorncombe, A Village History’. June lived in Thorncombe village from 1968 until shortly before her death in 2009. Written in 1982 in response to a national Women’s Institute initiative, it was donated by Mrs Ede, to the TVT history box in 2008. Reproduced here by kind permission of June’s daughter, Penny Kennedy. Thanks to Wilna Hawker for providing the aerial photo of the old school, to Nigel Higgins for the shot of the burnt out ruins and to Marina Atyeo for the old school photograph which came from Wilfred Potter’s archive.