Thanks to emails received we can add more about Wilfrid:

Former pupil Graham Curtis remembers his enthusiasm for motorbikes well . Wilfrid told him he had once had an Ariel Square 4, - a big 1000 cc motorbike.

“I am one of many Cotswold children who went to Westwood’s Grammar School. Northleach, & there met the lovely Wilf.

I do know that I was not the only one there to apologise for my boorish teenage behaviour all those years ago, & Wilf, a gentleman as ever, just said quietly “Young boys & girls behave as they do”.

I think his kindness at that time almost made me feel worse, but I’m glad we were able to have that conversation.

Typically, he seemed to think he was honoured to be there; we told him that he honoured us by his presence, not the other way around.

The two below photos, the school photo from 1966, & the undated soccer photo, but from much the same era, show the dear old chap we knew, & grew to love.” 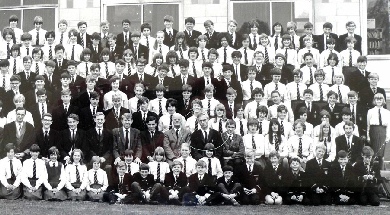 These lovely pictures of Wilfrid were very kindly lent to us by Mrs Sheila Holloway. 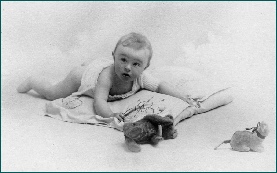 Wilfrid at 8 months and 3 weeks 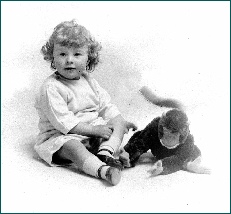 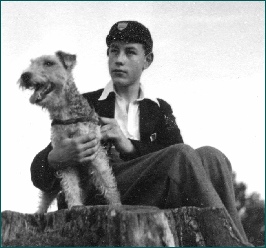 Many thanks to Sheila for the loan of these previously unseen photos. We would be very grateful to see any old photos to add to the archive on this site. All photographs are treated with the utmost care, and after scanning are returned immediately to their owner.

Wilfrid Potter and the Trip to Pakistan

In the 1980s, we asked Wilfrid (Yes, it was actually spelt that way) to provide some tutoring for our son Simon. Wilfrid would come round in the afternoon and spend an hour with him. One day we were chatting, and he mentioned about the time he had been in Pakistan.

“Oh, no, I was a chocolate soldier – I looked after German POWs”, he replied. I believe they gave him a rifle, but perhaps didn’t trust him enough to give him bullets as well.

The story came out that an old university friend had a daughter, whom we shall call Sharon, who had gone off the rails somewhat  and fallen out with her family. She had a child by one father, then married a Pakistani in Birmingham, I believe. At some point she had gone to Pakistan, where she had been arrested, and thrown into jail for drug smuggling.

Her father had washed his hands of her and had done nothing. So Wilfrid jumped on a plane and went to Pakistan. There he went and confronted the Justice Minister, and somehow got Sharon sprung from jail. Wilfrid and Sharon then travelled back to the UK.

I imagine this happened soon after Wilfrid retired, so possibly had the funds available at the time to pay for all this expense. Sharon saw this knight in shining armour, no doubt smartly attired, and apparently well off, appear out of the blue to rescue her. So she afterwards would write to Wilfrid from time to time, saying she needed money for the kids, etc. Wilfrid would send her some money, but limited the damage as much as possible.

Then,  a little later, things became too hot for Sharon in Birmingham and she had to make herself scarce. She jumped on a train to Taunton with her daughter, and then got a taxi to Thorncombe. Wilfrid had no phone of course, so she couldn’t warn him she was coming. It was in November, and late in the evening. The taxi sped through the night and then stopped. All was dark.

“I wanted to go to Thorncombe” she said.

“This is Thorncombe,” replied the driver.

Sharon and her daughter  then went and knocked on Wilfrid’s door. Imagine the shock and horror on both sides – Sharon at the state of the house, and Wilfrid to have two “young ladies” visiting. To those who didn’t know Wilfrid when he lived there, the house had not been decorated for about 40 years, so was pretty much a uniform dingy brown, kitchen surfaces piled high with papers and all sorts, no hot water, no bathroom, etc., etc. . . . .  David Woodman used to come round and tell him when the woodwork needed painting, or repairs were needed.

We know all this because Wilfrid then came charging round to our place, and hammered on the door. He was rather like Robertson Hare in the early Carry On films – “Oh, Calamity!!!” Wilfrid wanted to phone for a taxi and arrange a hotel  for the two ladies,  as it was clearly impossible for them to spend the night with him. We told him to send them round to us and we put them up for the night. In the morning, to Wilfrid’s enormous relief, we shunted them off  to Taunton and put them on a train back to Brum.

Wilfrid continued to send money to Sharon on occasion, and presumably that went on for some time thereafter. How gallant. 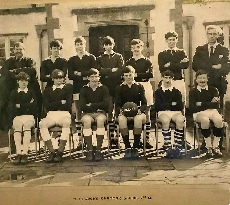 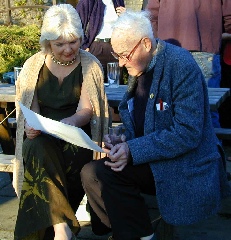 Wilfrid at the 2002 school reunion,    talking to  a former pupil

Eve Higgs writes … everybody who knew him has their own story to tell about Wilfrid. This is mine. My husband John and I moved to Thorncombe in July 1998. Our house backs on to Potter’s Field, as it is known locally, so we got to know Wilfrid as near neighbours. He used to let us burn our garden rubbish on his field and would often join us for a chat in front of the bonfire. 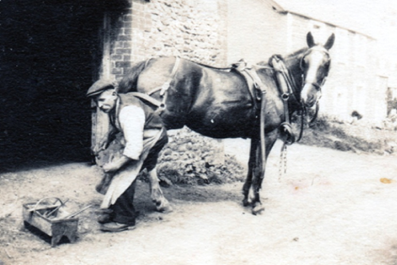 Until his death in 2008,  Wilfrid  Potter  lived at Worcest er on Chard Street. Mr Potter  had  lived there since boyhood and  was descended from an old Thorncombe family. He was  a  much loved and respected member of the local  community. Wilfrid’s grandfather, William Bonfield, was the village blacksmith. William is  pictured here  outside his smithy in front of  Little Orchard on what is now known as the High Street, previously Fore Street. Thomas’s Place is in the background.

The Bonfields  were also the licencees of  the Crown public house further down Fore Street and Wilfrid’s uncle Albert, Marina Atyeo’s grandfather ran the shop opposite the Royal Oak.  Wilfrid’s mother  Dorothy Bonfield,  is  seen  here with her sister Helen outside the Crown.

Wilfrid grew up in an all female household consisting of  his mother and  his grandmother Bessie Bonfield, who is said to have ruled the roost. He told my husband John and me that his father, Ernest Potter , who was the tenant at Thorncombe Farm,  lived separately from his wife and child  on Granny Bonfield’s orders,  and that as a child Wilfrid  had to visit his father  in secret at his house on The Terrace  at  4 High Street.  Bessie sold Worcester and the field behind it to Wilfrid  for £450 in 1948 but  continued to live there for the rest of her life. He also told us that he was threatened  by his grandmother with disinheritance if he continued to court a Winsham girl who’d caught his eye.  As a child Wilfrid was forbidden to play with local children, so his seems to have been a lonely childhood with only books for company. Mr Potter’s  strict upbringing resulted in him often being all things to all men.

Unmarried and childless, his gentle nature brought out protective instincts particularly in women. But while he was always amenable face to face, Wilfrid might subsequently claim to others after a given event,  usually involving an invitation which he always claimed he felt obliged  to reluctantly accept, that he had been coerced into acting against his will, which could result in misunderstandings between neighbours springing to his defence.

During World War II,  Wilfrid was in one of  the tank regiments but  evidently not the most effective  of soldiers. One day, he  fell asleep while guarding a group of German prisoners, and narrowly missed being put on a  charge, the prisoners  waking him up  and handing him back  his rifle  just in time as his senior officer approached.

A great cricket enthusiast, animal lover, and pianist, often to be heard playing at night, Mr Potter was a keen choir member  throughout his life. Wilfrid was also a classics graduate from Worcester College, Oxford, hence the name of his house and had a career as a Latin teacher at various schools in Sussex,  and in  the Cotswolds, returning to Worcester in the holidays,  before retiring to Thorncombe in the 1980s.

A gentle shy nervous  individual with lovely old-fashioned manners, doffing his hat as ladies approached,  Mr Potter was a familiar sight around Thorncombe,  during his latter years, dressed in worn belted gabardine rain coat tied round the middle with string,  an old peaked hat  with ear flaps pulled down over his ears on cold days, riding to and from Chard to do his shopping on his ancient sit-up and beg bicycle or striding off purposefully  clutching his brolly across the fields for lunch at a distant farmstead. Car driving neighbours would often pass him on his way back to Thorncombe, his handle bars hung with supermarket carrier bags, pushing his bike up the hills. It took a lot of persuasion to get Mr Potter to agree to allow the bags to be taken on ahead and he rarely  accepted offers of lifts no matter how awful the weather.

Back at Worcester, he appeared to live on Heinz tinned soup which was lined up neatly on a wooden shelf above an old electric cooker, next to a rickety 1950s ‘kitchenette’ cupboard with glass sliding doors and drop down flap.  In his incredibly untidy kitchen, a snug country  bachelor cave, the table  was piled high with  torn envelopes, letters,  papers and books etc. The last time I saw Wilfrid, he  was sitting on his wonky armchair in front of a very shiny halogen fire, reading Cicero in the original.

Such was the local affection which he enjoyed it was inevitable that during his final illness, Wilfrid  would be  looked after by a devoted  team of local friends and  neighbours enabling him to stay in his beloved Worcester almost up to the end of his life. There was standing room only at Wilfrid Potter’s  funeral which filled  the  parish church. It seemed as though all of Thorncombe had turned out to say goodbye.  Buried in the same grave as his father in St Mary’s overflow churchyard, father and son are finally  reunited.

With the exception of the first photo taken in 1932, these photos were among those  found in  Wilfrid’s house after he died and given to his cousin Marina Atyeo who has kindly given permission for them to be  reproduced here. If you have your own  memories of Wilfrid to add to these recollections,  or would like to write a memoir about another Thorncombe resident , or  have photos of old Thorncombe you would like to share,  please  email  us at  villagetrust@hotmail.co.uk .

A particularly appropriate name for a gent who loved walking. A recent development built on the site of the former Westwood’s Grammar School in Northleach in the Cotswolds. This road was named in memory of Wilfred.

With thanks to Martyn Hillier for this contribution. 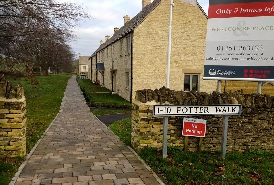