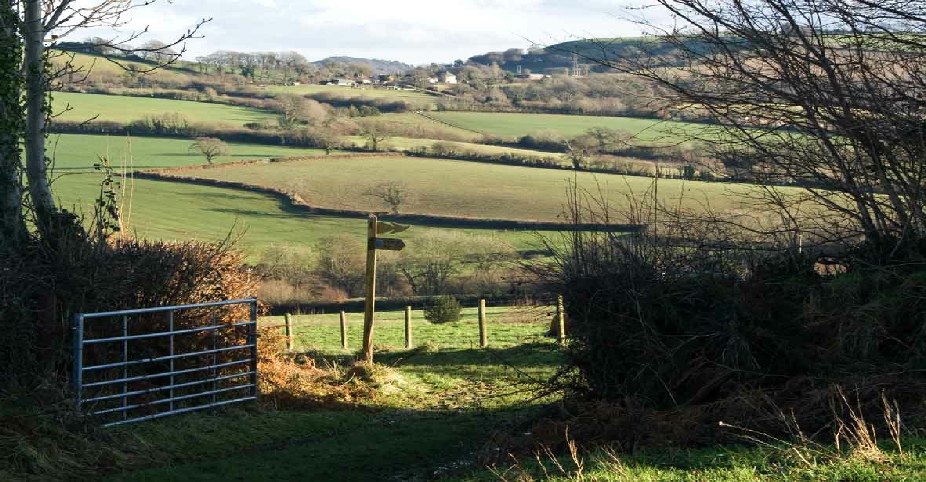 This walk takes you across Thorncombe vicarage’s  former glebe, crosses the King's Highway and follows part of the Monarch’s Way, a long-distance footpath, which commemorates the escape  route Charles II took into  exile in France in 1651 following his defeat at the Battle of Worcester.

For more information on the Monarch’s Way go to: http://www.monarchsway.50megs.com/index.html

3. You are now in Holway which was part of the King's Highway ,which dates back to the Middle Ages. It ran from Venn to Thorncombe Thorn and beyond. Parishioners were legally obliged to maintain these roads  and fined if they fell into disrepair. Holloways are found across the west country, nestled between high hedgebanks.  Hooves of animals being herded to market eroded the soil creating its characteristic 'u' shape.  The field next to White Rose Farm is called Drowwers Close, a misspelling which recalls the west country burr and was probably used as a regular overnight stop by drovers, herding animals across long distances to market.

4. Turn right and then left down Saddle Street.  Follow the road past Upperfold House on your left.

(Story of  Upperfold House) Until the 1980s its Georgian facade hid the remains of two 17th century cottages. Follow the road until you reach Yew Tree Farm where there are several small self catering units. Keeping the farmhouse on  your right  head for the gate which opens on to a track.

5. Follow the track through three fields passing through three gates. You are now in Starve Acre where beasts destined for the slaughterhouse were kept overnight with only water to drink from the nearby stream. Butchery is one of several trades which also included shoe making and flax dressing practiced in Thorncombe during the 19th century. Look out for the stile in the right hand hedge. Climb over it. You are now in ‘The Dungeon’, where the doomed animals were mustered in single file for the final part of their journey. Follow in their footsteps over the stile, follow the path keeping the wood on your right, pass through the gateway with the cattle trough and head for the stile in the right hand corner of the field. Climb over it.

6.  You are now in Witty’s Lane, which leads down to High Street. Turn right then left down Chard Street to return to the start of your walk outside the church.