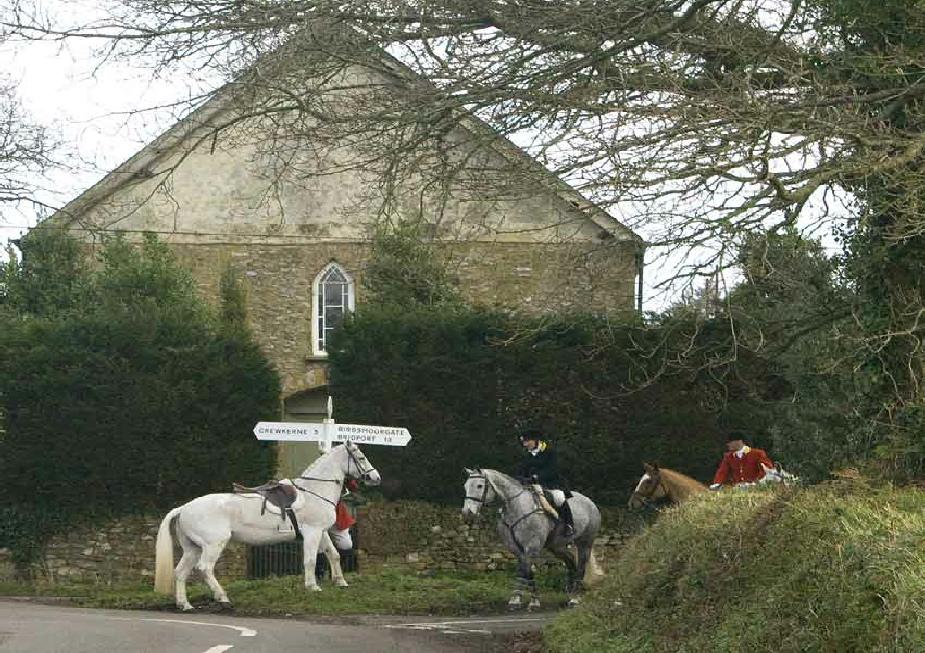 Thorncombe’s long non-conformist tradition dates back to the late 17th century with the establishment of a Quaker meeting in the parish. That independence of spirit among local people still extends to their worship. There is a small Gospel Hall in the centre of the village, and a United Reform Church just over the parish boundary at Venn which gazes serenely over the hills towards Thorncombe. Venn Congregational Church became part of the United Reform Church in 1972. Although the congregation has now dwindled to a comparative handful, monthly services are still held in the chapel with visiting ministers coming from Bridport, Crewkerne and surrounds, as they have done for over 100 years. [The Chapel has since closed and is now a private resid 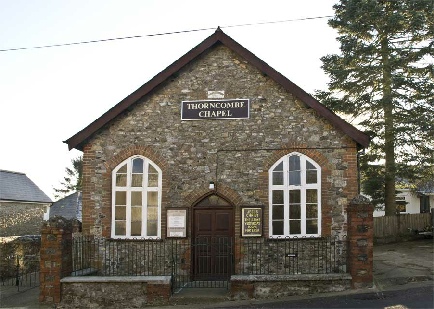 Until the late 19th century, people from Thorncombe attended services at Winsham Chapel when land became available in their home parish to build their own Gospel Hall. The site of a bakery destroyed by fire, was purchased and building began in 1878. It was built up to eaves level when the money ran out. For a time the walls were covered with reed until more funds became available two years later. The building was completed in 1881 by Mr Harris of Chard, Builder. The sounds of singing from the two services held in the chapel each Sunday are loud and joyful and there is often a mid week service which is also well attended. This has been the pattern since the completion of the building, together with the afternoon Sunday schools. The 1981 centenary celebration packed the chapel with people from a wide area. In 1980 further buildings were added including a schoolroom, kitchen and toilet.

Built in 1816 on ground given by George Trenchard of Chaffey, during a time when the cloth industry was in full swing, Venn Chapel’s records testify to a cheerful congregation, determined to own a place wherein to joyfully worship God in their own way. Working class wives and children gathered flints from the fields free of expense from the farmers. The whole chapel was built using voluntary labour. For a time Anglicans and Nonconformists occupied the chapel together, alternating services between their two preferences, but eventually the Anglican congregation became dissatisfied and left the chapel, moving to Blackdown church.

After Hugh Trenchard inherited Chaffey he allowed a group of Baptists to use the chapel in the evenings when the Congregatonalists did not want its use. But this arrangement proved unsatisfactory so the Baptists moved their services to the Ebenezer Chapel at Stony Knapps, now fallen into sad ruin. Eventually the Congregationalists sought to obtain legal to Venn Chapel from Hugh Trenchard. An agreement was reached and the life of Venn Chapel proceeded over the years with members keeping it in repair by dint of hard work and fundraising.

Chapel records speak of meetings and anniversaries celebrated with great enthusiasm. There were Sunday school treats and outings, with the venue for many of their teas being Chaffey Farm, under the benign eye of the Trenchards. An entry in 1896 tells how rainy weather threatened to spoil an outing. So local farmers used their wagons to take children, teachers and friends to West Bay. ‘A most enjoyable day was spent, and strange to say, several parents, though living so near had never seen the sea before’. This gives us some idea how closely tied to their village people were in those days. The first marriage at Venn Chapel took place in 1906 . It was between Mr J Stuckey of Thorncombe and Alice Bishop of Broadwindsor. In 1929 our own W.I. member Mrs Foxwell was married here, leaving after a reception for her new home at Sadborow Mill.

It is understood that the Ebenezer Chapel at Stony Knapps, in the parish of Winsham,  was built 1861 as a Baptist chapel and fell into disuse in the twentieth century and was briefly used as a youth centre before being converted into a family home in 1987. (EH September 2016)