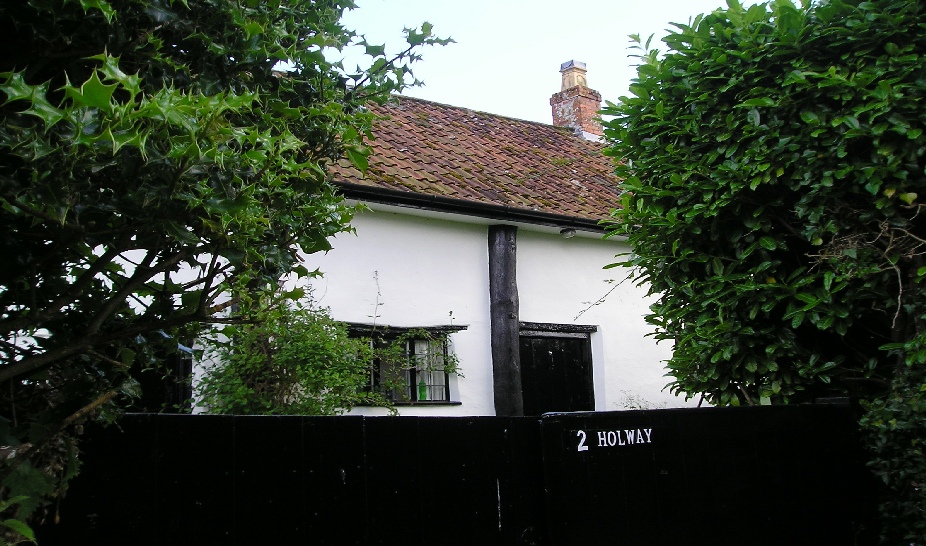 Our cottage and probably all the four or five in the same group originally belonged to Sadborow Settled Estates prior to 1923. When we bought our cottage in 1937 we were advised we were entitled to a 30-year title; but that a 'search' would be expensive in relation to the freehold price - £300! and as the Sadborrow title was well known locally we could forgo it.

Before 1935 it was lived in by a Mrs Potter, whose husband came from a farming family. She died in the cottage which was inherited by her daughter, Mrs Sibley wife of the thatcher of Saddle Street.

About 1935 it was sold to McIlwain, a developer In a small way who made some small alterations, such as false ceilings over the old oak beams, new internal Joists, and a small south window in the parlour, which was the handiwork of Ernie Henson, from next door. Mcllwain sold the cottage to a woman relative of Monica Browning (late of Upper Synderford Farm), who kept dogs there. Later she sold to a family from Australia who were only there a short time, and from whom we bought - through Lawrences in Crewkerne, then newly established. There was a well with pump in the kitchen; outdoor Elsan closet; iron kitchen range and courtier stove, oil lamps and oil cooker when we came. Thatched roof too; so was Madge Henson's In 1937. The chronology of our improvements might interest.

The local builder, Mr Hickford, reinforced the upstairs bedroom walls for sound­proofing. There were three small rooms up a very narrow winding stair, and the thatch was repaired by Sibley in the first few years. In 1948 the kitchen floor was dug out and lowered by 4 inches and tiled. New windows were drawn upstairs to the south-east, and in the kitchen to the north. In 1951 electricity was connected, and In 1955 an extension to the west was built with bathroom and W.C. and a septic tank dug in the garden. We had a small Sadie water heater, but all the water had to be hand-pumped into the cistern upstairs (two hundred pumps twice daily!) until 1968 when water was laid on direct and the hand pump removed. In 1963 we removed the ceilings to uncover original oak beams, in good condition in the parlour, but rather oddly awry in the kitchen - they still are! In 1964 we regret­fully removed the thatched roof which was in poor condition; we had found it - at that time - impossible to find a thatcher to work for us. Our son, Hugh, took careful photos from various angles of the old roof and of the new. Old tiles were put on by Woodland of Taunton. In 1969 we had nightstore electric heaters installed; The parlour floor was resurfaced in 1969, and another window drawn to the south-west in the 'spare' bedroom upstairs, meaning four new windows drawn since 1935. About 1973 we installed a telephone, which at first was on a party line due to shortage of equipment in those days! In 1974 fitted wooden sink and cupboard units were built into the kitchen under the south window; carpet tiles laid in the lobby and bath­room; In 1978 a Jotul Scandinavian wood burning stove put in the parlour; in 1982 the cottage was completely rewired.

Of course improvements like snowcemming and wire-cladding of outside walls, some Rentokil work and normal interior decoration has since gonre on alongside all this, and I have actually kept a record of every penny spent since WE came. In the ironic light of present inflated house prices, the combined total cost of all that we have spent on improvements and maintenance has only amounted to just under £20,000 to date!

Services used to be three, then two, then no pubs on the village; two bakers, and a general store. A bus service ran from Winsham to Lyme Regis once a week, picking up at the Squirrel, I think; and there was a return service in the evening. The village also ran a bus for shopping to Bridpont and Chard once a week. There was a butcher in Winsham. A van with fish and vegetables called once a week from Crewkerne, also a salesman with brushes and kitchen gadgets several times a year. And of course, the Warrens sold milk into our own tin can first from their farm at Glebe Farm (now Glebe Cottage). At one time I bought farm butter at Southcombe, and nearly all farms sold vegetables from time to time. We could manage quite well without a car, walking field paths from Chard Station.