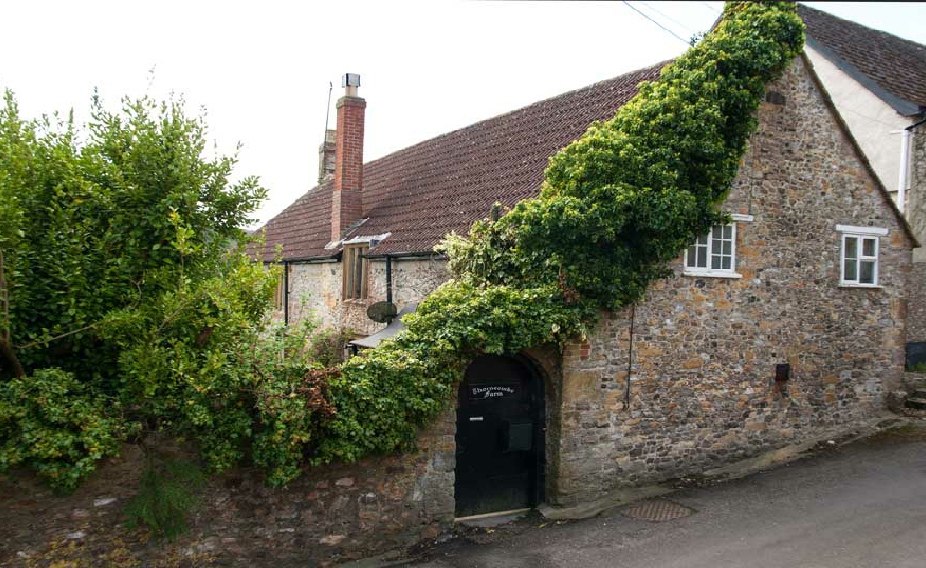 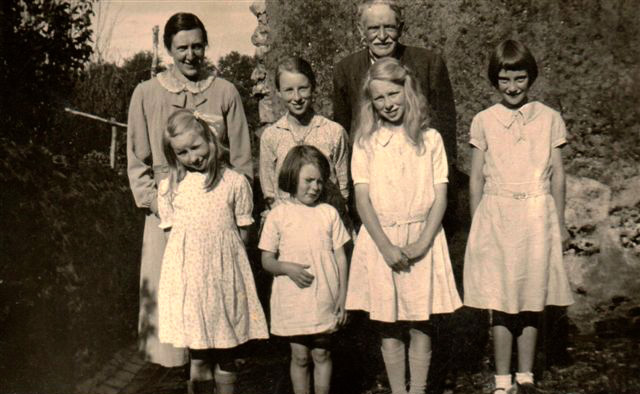 Back row right to left: Mr Ousley (who owned Thomas’s Place & The Terrace on High Street)

Mum & Dad moved to Thorncombe to start their married life at Saddle Street Farm. It is on the right hand side and is now a private house. The Miss Jones lived in a beautiful house almost opposite [Upperfold]. They had one servant [May Down].  At Christmas time, the two sisters used to invite all the children of the village to tea. Boys one week; girls the next; afterwards one sister would play the piano and the other would teach us a dance. Again in the summer we were all invited. Then we used to play croquet on the lawn and in the orchard at the back of the house where there was a swing and seesaw.

My first three sisters were born in Saddle Street, then Dad [Arthur Hellier] & Mum moved halfway up the hill above Stonelake, to Gribb Farm which Dad rented. It belonged to the vicarage. The cow stalls were up two fields. He had to carry the milk down to the dairy which was part of the house in two buckets with a yoke across his shoulders. That now has been a private house for a number of years [Glebe Cottage]. A school teacher called Miss Lucky (Miss Lukey..ed) lived there for a long time. My other sisters Alice, Rose, me, Amy,  and Ruby were born there. We went to school until the age of 14. It was only in the last three years that if you were clever enough you could go to a Grammar School at I think it was Axminster. Miss Birket was Head Mistress. She was a dreadful person. But I was very fond of Wilfred Potter. He became my confessor. 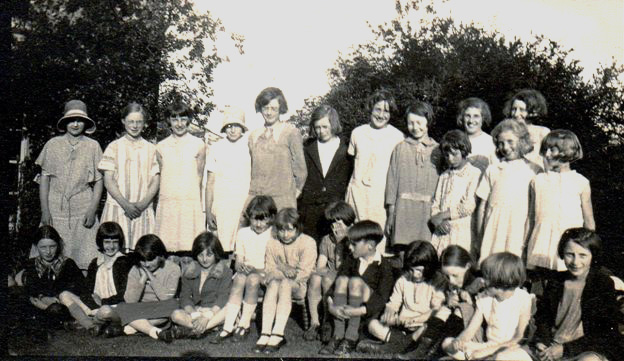 Mum had a girl living in to help with all us children. Mrs Bonfield was the first and she married from there. When married the Bonfields lived in a little wooden bungalow at Stonelake. Mr Bonfield had a little Garage on the side and used to repair all the bicycles etc. 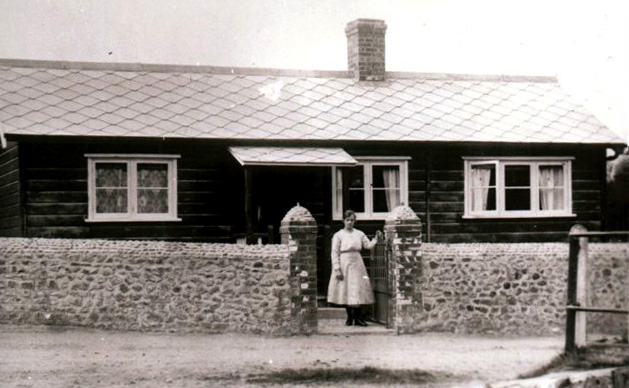 Edith Bonfield at her front gate

Her husband  also worked for his uncle at the post office [Bonfield’s Stores] delivering coal around the district. Mr Bonfield’s shop was lovely. Every  Christmas he had a large Father Christmas in the window. His shelves were always full of the most  lovely sweets. There was only one phone in the village and that was in the corner of the post office. You had to pay Mr Bonfield 6d to use it. There were three pubs in the village, The Crown at the bottom of the hill, the Royal Oak opposite the Post Office and one at the top of the village [The Golden Lion].

Next to the school lived the Vincents - Dad, Mum,  their daughter and two sons. Mr Vincent  had a garage further up Chard Street, next to Jubilee Cottages. He had one taxi and two buses which used to go to Chard on Saturdays. We had several bicycles we lent to anyone for 6d. It was the only way people had of getting anywhere. No one could afford a car. There were only eight in the village. As children if we heard one coming we used to run outside to see it go by. When we were living at Gribb, mum used to take the Miss Jones to Chard road to catch the train with a pony (called Kitty) and trap. Mum used to charge them 2s6d. There were no houses past the garage at Chard Street and none the other side of the church, only the cemetery. Down the alleyway behind the Old Bakery there was  a plot of land divided into lots, for the cottages on both sides of the alley to grow vegetables. At the top of the plot were two bucket toilets with wooden seats. One for the left and one for the right hand side of the row. Other people had them at the bottom of their garden. Only the Vicarage had an inside toilet.  There was a blacksmith shop with a house. Next to that there was another bakers and in the side of that a shop, which I think was built after I left Thorncombe.

Dad and Mum moved to Thorncombe Farm which he bought when I was three years old [in 1926]. It had a lovely entrance next to the little chapel with fields behind it. From one field Dad gave the water to the village. A tap was built next to the Jubilee Hall. All the people around used to get their water from there. We used to supply all the village with milk, eggs, veg on Saturdays.  Chicken could only be afforded at Christmas. Rabbit was what people lived on during the week. We sold them at the door for sixpence. The next day we gave them 2d for the skins. A rag and bone man came once a fornight to collect them. Thorncombe Farm was lovely. A green door, with flowers growing down the front of the house and the rest of the garden laid out to veg. Two sitting rooms and one little room we had as a play room. We used to have other children in and roast chestnuts and potatoes on the fire. Other children were always allowed to stay for tea on Saturday. It had four large bedrooms.  A little gate from the garden gave entrance to all the farm buildings, all kept nice. We had our own water pump in the garden.

Most people in those days either went to church or chapel. No one except the vicar, The Reverend Hardy and his wife went on holiday. No one could afford it. It was just all work. During hay making and harvest  the village men all came by in the evenings after coming home from their work to help; glad of the extra money. There was no gas or electric, everyone cooked by an oven beside the fire or on an oil stove . For light  there were oil lamps and candles.  I only ever saw one plane fly over Thorncombe. Ruby and I thought it was following us, so we ran all the way up the hill and hid upstairs under the bed. How life has changed. Now every road is full of cars and planes going over all day. Peter my son-in-law has his own plane and often goes up in it.

There was no funeral director in Thorncombe or a hearse. Mr Stuckey the village carpenter made all the coffins, having   measured  the body. He lived and had a workshop down the alleyway off Fore Street [opposite Glebe House]. The coffin was carried on a [wheeled ] bier, pulled and pushed by four bearers to the church,  sometimes quite a ways. Everyone, men, ladies and children stood outside their house with heads  bowed,  as they passed  by.  Most villages had a woman who used to lay out the dead. She  also brought all the babies into the world. In Thorncombe it was Mrs Ebdon.  She lived two doors down from Thorncombe Farm, the first cottage on that row; no qualifications but they seemed to manage

We had one nurse in the village, Nurse Hutchings. She always seemed to be out on her rounds on her bicycle. A doctor came once a week from Chard to take a surgery in the front room of  Mrs Stuckey’s cottage opposite the cemetery. He would make up  and give you your medicine  at the same time. My youngest sister Joyce broke her arm at school. Dad took her  straight  round  and the doctor  set and plastered it right there; no x-rays then. He would also pull your teeth out if you wished  to save you going to Chard. Mrs Stuckey would allow the mamas and children to wait in the kitchen but the men had to wait outside in the road regardless of the weather. Thinking back I wonder how we survived in those days.