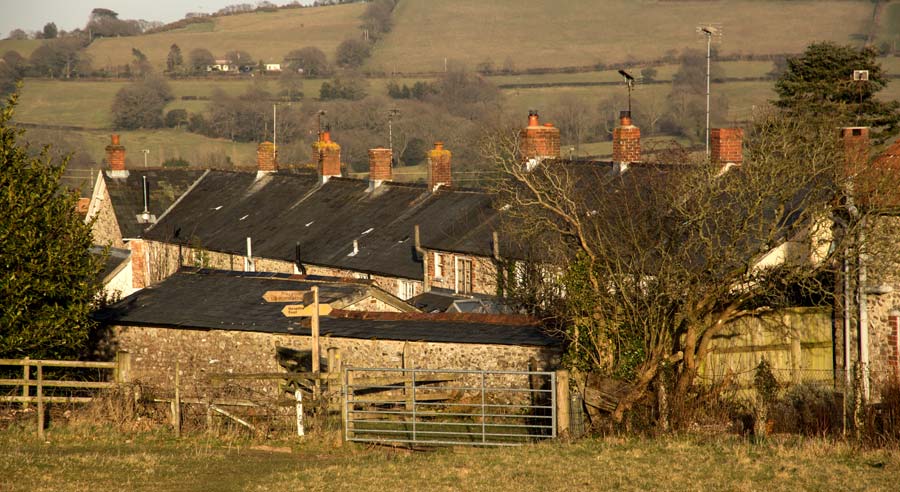 Hanged as a   Monmouth Rebel

Thomas's Place and The Terrace  were built on the site of Pinneys Tenement by stone mason Thomas Ousley between 1865 and circa 1889. The Ousley family's association with Pinneys  has been traced back to 1696. Another thread which runs through its history is how the Ousley family retained ownership from generation to generation, using  various legal agreements to provide security and in some cases an income to enable a degree of financial independence for women members of their family. Before changes to the law in 1882, women lost their property rights on marriage. The 'better sort', the aristocracy and gentry, have always found ways to protect their womenfolk's financial interests, but the Ousleys were of  the lesser 'middling sort', skilled craftsmen, tradesmen and the like, which is what makes their  story even more interesting.

Ancient deeds dating back to the beginning of the 17th century at Dorset History Centre  tell us that in 1623 Richard Bragge Esq (1571-1643) of Sadborow sold ' the messuage [dwelling house and outbuildings] and Tenement  [land] called Pynneys with garden and orchard adjoining and belonging ... [and] the adjoining meadow called Pynneys Close'  to Robert Bragge the Elder of Chaffeigh. In 1653, the year Oliver Cromwell was appointed Lord Protector by Parliament, Robert Bragge gave half of Pinneys to his eldest son Robert. Robert Bragge the Elder was one of 39 Thorncombe parishioners who lent money to the parliamentarians during hostilities. He retained a lifetime interest in the other half of the house which included 'all the roomes on the west side of the entry ... the Backside [back yard] ... and outhouse with the fruit here grown with  ... [shared]  use of the kitchen entry, stayrs, barn stall and stable' . Great Pinneys, Little Pinneys and Lower Pinneys Close are marked on the 1838 Tithe Map behind where Thomas's Place and The Terrace stand today. Plots 955-959 listed on the tithe apportionment as being owned by William Ousley pinpoint the location of Pinneys tenement on High Street. 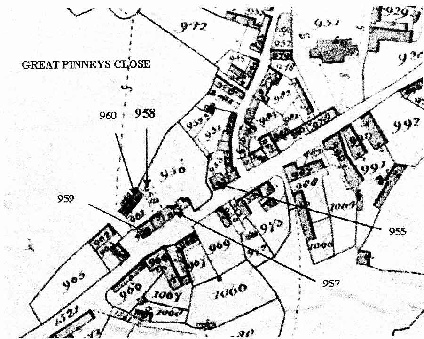 (Reproduced courtesy of the Dorset History Centre and Richard Holt)

Surviving records for Pinneys Tenement skip a generation until 1696 when an Ousley enters the picture for the first time in a pre-nuptual marriage settlement between one of Parliamentarian Robert Bragge's descendents, yeoman John Bragge and Grace Tillman of Musbury (1678-1724). The agreement makes it clear that Grace, a spinster 'of the third estate', is marrying 'up'. Her husband-to-be John, is the younger son of  Robert Bragge the Elder, 'yeoman of the first Estate', a member of the gentry. Under the deed Pinneys was sold in trust with the bride and groom being given an equal  lifetime interest. The trustees were the groom's uncle Thorncombe parish priest William Bragge, another Chaffeigh Bragge and Richard Ousley of Colleton [Colyton], 'yeoman of the second estate'. Grace's share ensured her security if widowed, perhaps negotiated on her behalf by Richard Ousley who appears to have had connections with her parents. The couple also agreed to share 'the Hall  ... a way through the stairs, ... the milkhouse [dairy] ... the buttery [storeroom] next to the hall ... the ... kitchen in common ... the hall chamber [directly above the hall] ... entry chamber [directly above the entrance hall] ... the cheese chamber [above the dairy?] ... orchard garden, outhouse, barn, stable and Tallet [hayloft]', with the groom's father.

The description of the house suggests it would have looked something like Thorncombe Farm and  the north-west wing of School House Farm, both of which also date back to the same period. The hall [main room for living, cooking and eating] to one side of the front door and the other ground floor rooms known in the 17th century as the services [dairy, storage etc] on the other side of the passageway. The rooms above, referred to as chambers, were used for sleeping and storing valuable possessions. There is no record of John Bragge's death. Grace Bragge died a widow in 1724 so probably remained  living at Pinneys until her death. She brought no property into  the marriage and appears to have died with very few personal possessions.  In her will, which can still be seen at Dorset History Centre, she left a shilling to each of  two of her daughters, Grace Phelps and Dorothy Cole. To another daughter Sarah Limbrey she bequeathed two cooking pots, an oak coffer, and all her clothes with the exception of a 'coton whittle' [cloak] which she left to her other daughter Elizabeth Pye. A small box  'that will hold about a peck' and lace handkerchief went to her grand-daughter Elizabeth Limbrey. To her son John Bragge, whom she appointed sole executor she left the balance of her estate and chattels after debts and funeral expenses had been paid.

While Richard Ousley retained his share of  Pinneys after  Grace Bragge's death, parish priest Thomas Cook bought his predecessor William  Bragge's share at some stage and sold it on to spinster Esther Chubb for £40 in 1736. In 1738 Esther married blacksmith Henry Hoare having protected her interest in Pinneys in a deed drawn up when she bought the property. When her daughter Edith married butcher Thomas Ousley, in 1769, the two halves of Pinneys Tenements were united under Ousley ownership. In her will widow Edith Ousley (nee Hoare) divided the house between her  butcher sons. Thomas inherited 'the Lindhay [open shed with upper floor] ... half the ... passage ... now in the occupation of  ... tenants Elizabeth Baker and Peggy Russell and his twin brother William,  'who occupies the eastern part ... with the garden, slaughterhouse and stable and ... half the entry' inherited the other part of the house. Once probate had been granted in 1824 Thomas assigned his share to his wife Catherine, which gave her a private income from the rent. By 1838 Thomas and Catherine's nephew, William Ousley,  is listed as the owner/occupier. Apart from their eldest daughter Esther (1815-?) who married Henry Perry in 1838, all of Thomas and Catherine's six other children died in infancy. The tithe map of the same year  (above) clearly shows a building which matches the 17th century descriptions in the property deeds of Pinneys House.